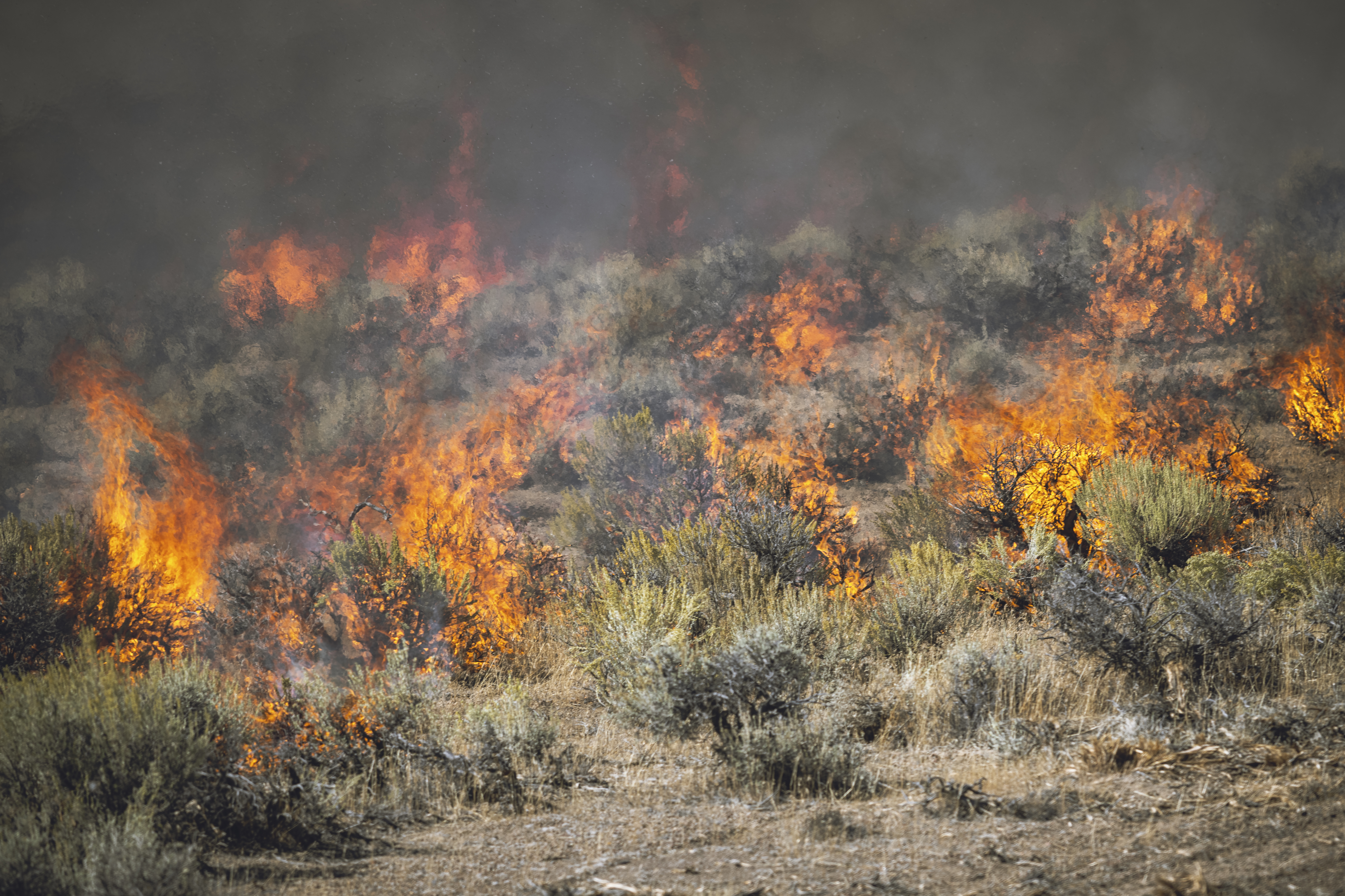 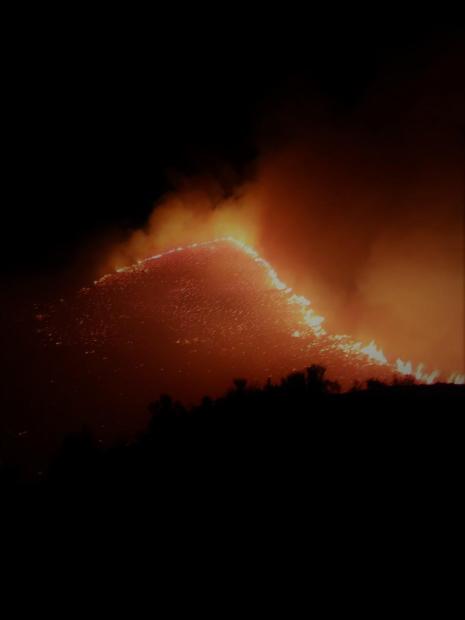 The Burns Interagency Fire Zone responded to 60 wildfires this summer that burned 2,791 acres, which is well below average. “It was attributed to the summer that we had. Everybody saw that it was a cooler weather summer. It was the same situation across the West,” said Jeff Rose, the district manager for the Burns Bureau of Land Management.

Kim Valentine is the fire staff officer for the BIFZ and is responsible for the management of fire and fuels for the Burns BLM District, the Malheur National Wildlife Refuge and the Emigrant Creek Ranger District. Even though it was a slow fire season compared to other years, this year’s larger fires included the Round Butte fire, the Drewsey fire, the Diamond Valley fire and the Mud Creek fire. Part of Valentine’s job is to coordinate additional resources for those fires and making sure the firefighters are getting the direction, supplies, equipment they need to do the job.

Valentine has worked with the BLM in Burns since 1990. She left for 10 years in 2009 and just recently returned to take on the fire staffing position. Over the years she experienced a lot in her career. “I will tell you that from the time I was here until now, the communications with everybody, Rural Fire Protection Associations (RFPAs), our local fire departments, both Burns and Hines and our other partners we work with is phenomenal, and that coordination and working together is pretty incredible” she said.

Part of the reason for that seamless coordination is the work that is put in before the fire season begins and the work done through the Harney County Wildfire Collaborative, an initiative of the High Desert Partnership. Folks from different agencies get together and talk about the lessons learned from the previous fire season and what they need to do to better prepare for the upcoming fire season. Valentine said that it’s a way to get everybody in alignment. That face-to-face time can be invaluable for building better relationships.

Joshua Giles, the district ranger for the Emigrant Creek Ranger District in the Malheur National Forest, agrees that cooperative partnerships helped to make this fire season a successful one. He noted that in his zone, they had less than 30 fires with the largest fire burning about 100 acres.

One success that Giles would like to build on was the response to the Box Fire, which was started by lightning. “It was inside an area that was surrounded by roads, so we allowed it to burn to those roads instead of just putting it out right away with direct suppression efforts.” Giles noted that this is not something they can do with every fire. The conditions have to be conducive for it to take place. In this case, conditions were a little wetter, and the fire happened in a place that had burned previously so there wasn’t a lot of extra fuel to burn. “It allowed fire to play a natural role in that area, and I’d like to see us be able to use that again when the opportunities arise,” Giles said.

Rose said that the fires that did occur in the BIFZ had good initial attack responses from federal, state and local resources. “One of the biggest positives I saw from this season was that we continue to improve relationships working with the rangeland fire protection associations,” he said.

He believes the knowledge that the RFPA members bring to the process is important. The RFPAs are made up of community member that live in their respective areas. “They know the roads,” Gear said. “A lot of times they can get there faster in a lot of places, like Fields/Andrews for example.” The closest BLM station to Fields/Andrews is in Frenchglen, which is about an hour away. The Fields/Andrews RFPA members can respond to a fire within 15 minutes, which can have a great impact on quelling the size of a fire.

Rodney Hoagland is a member of the Fields/Andrews RFPA and member of the wildfire collaborative. He acknowledges the importance of having a liaison between the RFPAs and the other agencies. “Jacob’s been really a big benefit to our RFPA. He’s done some training for us. He’s always there when we need something. He’s just been a real great guy to have around. And his position was created by the wildfire collaborative,” he said.

Malheur National Wildlife Refuge and the Burns BLM combined forces to fund the liaison position, and it has made a difference in making sure the RFPAs are getting the information and equipment they need. Gear said that the RFPA members want a place in the decision-making process, especially when incident management teams are brought in to fight a fire. “They want to have their voices heard and their concerns within the community,” Gear said.

Gear noted that this year, the BLM was able to give Fields/Andrews a fire engine through the Rural Fire Readiness Program. In addition, Gear facilitated distributing 120 hand-held radios and 50 mobile radios throughout all the RFPAs in Harney County.

Part of Gear’s job is to make sure the RFPA members are getting the training they need and this year, he helped provide training to 132 RFPA members. This included refresher classes, basic fire training and advanced RFPA fire operations classes.

RFPAs are non-profit 501c3 organizations that depend on dues from members to cover the cost of operation, Gear said. If you live in rural Harney County and live within the boundary of one of the RFPAs, you could be a member and benefit from the equipment and training of your local RFPA. Fees to join RFPAs vary from one to another. Some have a flat rate. Some base their dues on the number of acres you own. Residents who live within an RFPA boundary have the option of being a member and/or a responding member in the event of a fire. RFPAs hold trainings to make sure responding members have the knowledge and skills to respond to a fire. Those who live within an RFPA boundary but are not members may be billed for the RFPA’s fire engines and personnel time in the event they respond to a fire on your property. “It’s really important that folks pay their dues,” Gear said. “That yearly fee allows the RFPAs to operate. It’s really important that folks support those if they fall within those areas.”

If you would like more information about RFPAs or wonder if you fall within the boundary on one, contact Gear at 541-589-4669.

This year, through facilitation from the Harney County Wildfire Collaborative, an Alertwildfire camera was installed on Steens Mountain in an attempt to help with early fire detection. While it didn’t end up spotting any fires, the camera proved helpful in monitoring them.

Valentine said that after a fire was called in, the BLM was able to see the fire in real time. “We were able to look at those fires as they were evolving,” she said. “It’s a good tool. It certainly gives us an eye on the fire as we’re sitting in the office looking at the camera. It helps us be proactive.” Once they know where a fire is located via the camera, they can notify adjacent landowners of the situation, if need be. “We’re already making those calls to them saying, ‘Hey we’ve got a fire. It looks like It’s not impacting you yet, but it might, and we’re just giving you a head’s up. We’ll call you and keep you updated’,” Valentine said. “So it’s a great tool to give us a little more insight. It gets us all on that same page a little quicker.”

For next fire season, additional cameras will be installed on Riddle Mountain and possibly in Wagontire.

For Valentine, the big takeaway from this fire season is that the coordination efforts between the forest service, fish and wildlife, local fire departments, the RFPAs and the BLM all came together for the common goal of fighting fire. The BIFZ comprises five million acres of land. “It doesn’t matter color of engine. Whether it’s green, yellow, white, whatever, if there’s a fire, the closest engine is going to go, and we wear that proudly because we’re doing good work on the landscape,” she said.

Burns District BLM manager Rose said that while the cooler weather helped keep the wildfires in check, he also wants to give kudos to all the personnel who cooperated to make this a below average fire season. “There were opportunities where fires could have gotten big, and I think our ability to work cooperatively across borders has helped us keep the fires small,” he said. “This year, I think the combination of weather and the way we’re doing things is helping to eliminate those large fires in some situations, so we have to take credit and take advantage of good things happening.”