What We've Been Up To Lately

Some Great Questions and Answers on Fire

How much does prescribed fire improve long-term economic and ecological outcomes?

Luckily, there is a wealth of data and science that answers this question. In 2000, the Joint Fire Science Program funded a research study called the Fire and Fire Surrogates Study, which established 13 study locations in frequent fire forests across the nation to examine the experimental impacts of mechanical treatments and prescribed fire in a controlled and replicated experimental way. There are over 200 peer-reviewed publications that have resulted from this project and the established treatment units, including impacts of treatments on economic outcomes, wildlife habitat, fuels reduction and fire behavior, among other things.

There is a great website for the FFS project  that summarizes the results of these studies (see link to website here), which includes an executive summary of the project (see About FFS tab), findings of the studies summarized by Ecoregion, among other things (see Findings tab), and a list of publications (under Publications tab) sorted by topic area, such as Economics, Ecology (including soils, wildlife, and veg impacts), and Fuels. There is a study site located in the Blue Mountains on the Wallowa-Whitman National Forest, so there is even some locally relevant data to draw upon. I encourage anyone that is interested to take a look.

In addition to this project, there have literally been hundreds of other studies published on the effects of prescribed fire (like this one here or this one here) that have been conducted outside of these FFS plots or in a less experimental way. The FFS project happens to be particularly useful in that it is spatially replicated, examines and compares the impacts of different treatments over long time periods (we are now 18 years out from the original project), and studies were conducted in a controlled, and experimental manner. 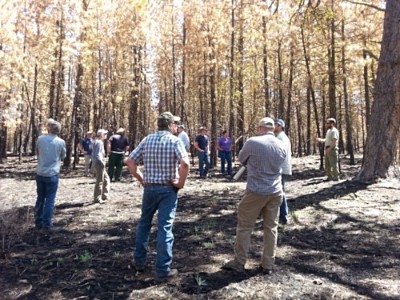 The group discussing prescribed fire use on the Dairy Project.

How successful is the US Forest Service at keeping prescribed fires contained?

There are two reports that might be useful for answering this question, which are attached below.  No doubt there are others out there, but these two are consistent in their results, even though they are from very different burn organizations.  The first report, by Dether and Black, primarily talks about ways in which the USFS can avoid situations leading up to escaped prescribed fires.  In particular, however, there is a table on page 2 (or pg. 50) of the document that summarizes the number of prescribed fires conducted by the USFS over different time periods and the number of escaped fires during those time periods.  According to the numbers, from 1995 – 2006, there was a success rate of >99%, meaning less than 1% of prescribed fires escaped.  The second report details activities of prescribed burn associations in the Midwest, and of 1094 reported prescribed fires, only 16 escaped, or 1.5% total.

What are the ecological and economic outcomes of salvage logging?

This is certainly the most nuanced of the three questions, but generally, salvage logging is conducted with a purpose of recovering economic value of a portion of the timber that might have been lost due to a given disturbance event. This was the primary purpose of the area salvage project on Canyon Creek. Thus, the intent of salvage treatments is for a net positive economic gain—whether or not this always happens depends on many factors, which would include, among other things, market conditions and wood value at the time it is harvested. 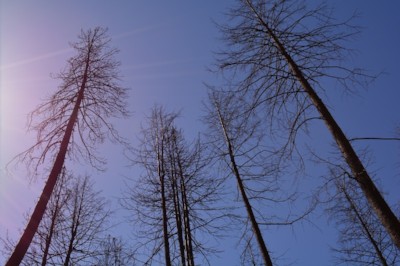 There are two recent meta-analysis focused on ecological impacts of salvage logging that might be of interest for those wanting to know more about this topic. The strength of a meta-analysis is that it takes existing data from dozens of site specific studies and re-analyzes it to examine broad-scale trends. The first study (link here) looks at the impacts of salvage logging on biodiversity (including mammals, birds, reptiles, decomposers—both insects and fungi, etc.), and was just published in January.  It has a great list of references at the end if you are interested in a specific species group and want to dig further.  The second study looks at the impacts of disturbance (broadly defined, but includes salvage logging) on non-native species abundance and diversity (link here), published in 2015.

One limitation of these studies is that often salvage logging occurs in areas with a high degree of change post-disturbance (e.g., high severity fire with almost complete mortality), and rarely do we salvage only a portion of the dead trees in an area—so, it’s hard to know if limited salvage in an area would have the same ecological impacts.  Luckily for us, Blue Mountain Forest Partners is engaged with the US Forest Service Rocky Mountain Research Station on research in the Canyon Creek Salvage that will hopefully illuminate whether there are some thresholds of salvage before which you can have neutral or beneficial ecological outcomes, at least for woodpeckers.  Stay tuned for those results!

You can learn even more about what the Harney County Restoration Collaborative has been doing by looking through our Newsletter Archive.