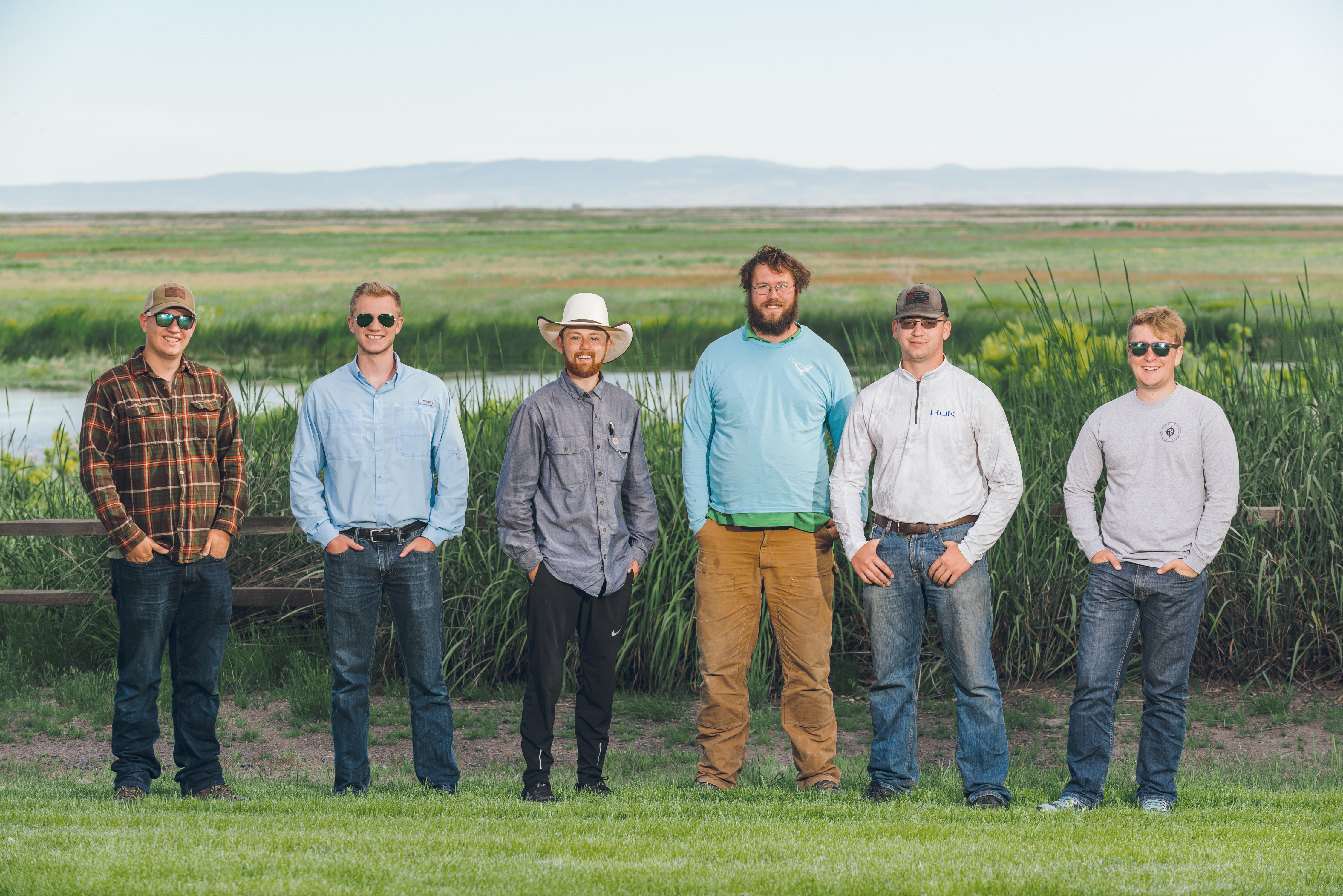 In his first week on the job as a vegetation monitoring technician for the High Desert Partnership, Tyrell Holmes cataloged plants and assisted with a carp biomass project on the Malheur National Wildlife Refuge. Holmes, who is from Eagle, Idaho, and just graduated from Treasure Valley Community College, is getting valuable hands-on experience that will assist him as he pursues his degree in fisheries at the University of Idaho.

After a week and a half on the job, Holmes is settling into the work. “I didn’t know anything about plants because I was more fisheries oriented but it has gotten so much easier as we’ve gone along,” Holmes said. “I’ve gotten a lot better at identifying plants.”

That’s precisely part of the High Desert Partnership’s goal with these tech positions, to give high school and college students real-world experiences in natural resource jobs and to further the goals of the Harney Basin Wetlands Initiative, one of the partnership’s collaborative efforts. Harney Basin Wetlands Initiative partners are working on solutions for the ecological and economic challenges that face land and water management in the Harney Basin. Specifically, managing Malheur Lake and flood irrigated wet meadows to provide food for migrating water birds and sustainable economic return for ranching families.

Ben Cate, the Ecological Coordinator for the High Desert Partnership, said the organization hired two crews this summer, one working in fisheries and one working with plants. The fisheries crew is part a project to compile historical survey data from fisheries and collect new data to fill in the information on places that haven’t been surveyed recently or that need more data. The crew will also collect environmental DNA from carp to try to establish the upper threshold of where carp currently exist in the basin. This sampling technique involves collecting water samples that can be sent to a lab to test for fish DNA. Think Ancestory.com for fish, where water samples contain DNA from fish species. This sampling method allows for the crew to sample more areas throughout the basin. The project is funded through the Oregon Watershed Enhancement Board Focus Investment Partnership Grant obtained by the High Desert Partnership for the Harney Basin Wetlands Initiative. As partners in the Harney Basin Wetlands Initiative look at ways to restore Malheur Lake and deal with the carp infestation, the technicians will be doing valuable work to assist in that goal. “If we were going to be doing any manipulation to waterways in Malheur Lake and carp management, we need a snapshot in time of where the carp are right now,” Cate said.

In addition to the fisheries crew, the High Desert Partnership has also brought on  a crew of vegetation monitoring technicians to sample and record data on plants to understand the effects of the haying and grazing program on the refuge. It is funded through an agreement with Oregon State University and Malheur National Wildlife Refuge.

Cate said that the  crews indirectly work on fulfilling one of High Desert Partnership’s other collaboratives – the Youth Initiative, also called Youth Changing the Community, which focuses on engaging the community to develop opportunities to sustain and enhance the next generation with motivation and skills that inspire self-worth, pride and good work ethic.

In addition to advertising on national job boards for these positions, the High Desert Partnership also contacted local colleges as well as science teachers at both Burns High School and Crane Union High School to find local students interested in jobs in natural resources.

Holmes, one of the plant crew members, found out about the positions through his professor Marcus Nichols at Treasure Valley Community College. “It just sounded like such an amazing job. I’m pretty sure that almost everyone in the natural resources department applied for it,” he said.

Holmes hasn’t always known what career path he wanted to take. “Even after high school, I didn’t know what I wanted to do. I knew I didn’t want to be in an office. I knew I wanted to be outside. Natural resources just seemed like the place for me,” he said.

He’s enjoying the work he’s doing this summer so far, with one exception. “The mosquitoes are just terrible. There’s enough of them to pick you up and carry you away,” he says with a laugh.

Burns High School 2019 graduate Chris Boyd is also working for the High Desert Partnership this summer. He is on the fisheries crew and found out about the job from his science teacher. He thought it sounded like an interesting opportunity to make some money over the summer. However, Boyd doesn’t ultimately aspire to work in the natural resources field. He is a musician and plays the saxophone and guitar. He’ll be majoring in music at the University of Oregon come fall. Even so, the tech position is providing him with great work experience. “It’s fantastic. My crew’s really good and my boss is great,” he said. “I like the people that I’m working with and the connections that I’m making.”

Cody Collins, a Treasure Valley Community College student from Vale majoring in natural resource management, also found out about the job through his professor. He found the natural resources career path in a round about way after obtaining his associate’s degree in applied science at the College of Southern Idaho and decided he didn’t really want to be a mechanic.

The field of natural resources appeals to him because he enjoys the outdoors in general. “I enjoy hunting and fishing in my free time,” he said. “So what better job to do than something that leads to the betterment of the hunting or fishing. It’s something that I’m passionate about – the outdoors.”

Mark Chowning is the Aquatic Health Coordinator for High Desert Partnership and is overseeing the crews this summer. “It’s a huge priority of mine to create as many learning opportunities as I can for these seasonal technicians. I want to make sure they acquire the skills to move forward in their career paths,” he said.

Chowning realizes that not all the technicians will go on to pursue jobs in natural resources, but he still wants to make sure these students learn skills that will help them regardless of what field they enter. “Some of them are interested in other career paths but have still proven themselves to be more than capable and, in fact, excel in this field,” he said.

Chowning recently moved to Oregon from Missouri to work for High Desert Partnership and said that the field of natural resources is a broad one that can encompass field work and lab work as well as public outreach. “That’s one of the things I like about this position so much is that it incorporates all of that into one deal, so it helps you develop all of those skill sets,” he said.

High Desert Partnership’s Ecological Coordinator Cate is a home-grown Harney County guy who graduated from Burns High School and got his degree in wildlife biology from Oregon State University. He worked for the Oregon Department of Fish and Wildlife in a variety of places before finding his way back to Burns in 2015. Cate wants local students to know that natural resource positions abound in Harney County, whether through the Bureau of Land Management, the Oregon Department of Fish and Wildlife, U.S. Forest Service, the Natural Resource Conservation Service, Eastern Oregon Agricultural Research Station or the Burns Paiute Tribe. From range management to fish and wildlife biology to archeology and cultural resources, there is a wide variety of jobs that need to be done.

Through these summer tech positions the High Desert Partnership is continuing its efforts to educate students about the career paths in natural resources here in this community. “This is a way to show there’s actually quite a bit of opportunity here in the natural resource management realm and gives students a little glimpse at the jobs they could potentially have,” Cate said.