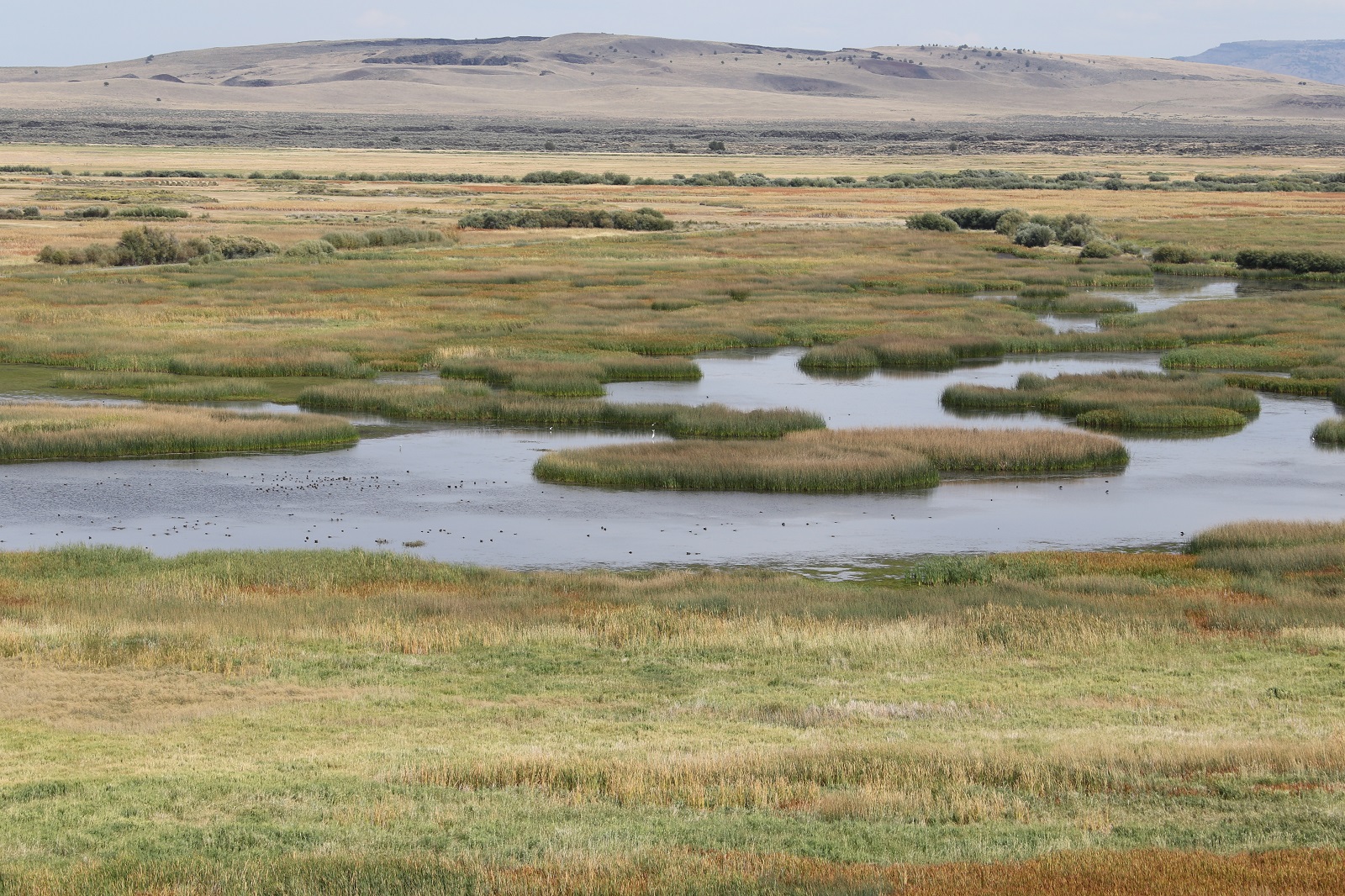 Groundwater Declines In Harney Basin Drive Community To Work Together 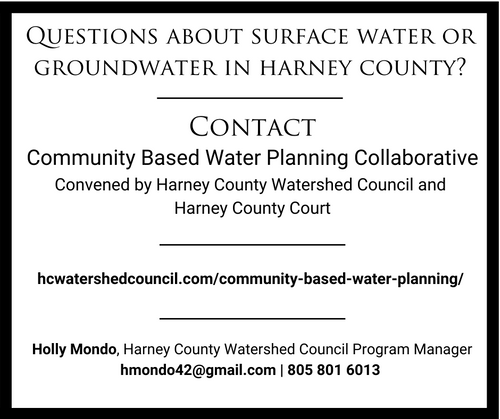 Harney County residents have been aware for a number of years that there are places in the county where groundwater levels have dropped and some residents are having to dig deeper or drill new wells to access water.

The groundwater problem has been more than a decade in the making. As the results from a multi-year groundwater study become available from the Oregon Water Resources Department and the United States Geological Survey, residents are learning more about the unique geology and the basin water budget and what it might mean for the future of groundwater use the basin. Fortunately, a collaborative group has been working together for more than three years to develop and pursue strategies to sustainably manage water for the benefit of the community, the economy, and the environment. This includes strategies and projects to reduce groundwater use and help achieve more stable groundwater levels.

A Distinctive Place
The Harney Basin wouldn’t be what it is without surface water and groundwater. Surface water from the Silver Creek, Silvies River, and Donner Und Blitzen watersheds travels across the landscape and end up in Malheur and Harney lakes, with Harney Lake being the lowest point in the basin. Because the Harney Basin is a closed basin for surface water, the water stays here or leaves by evaporating or being transpired (used) by plants. It does not leave the basin to flow into the ocean.

Ken Bierly, a contractor with the Harney County Watershed Council and Harney Basin Wetlands Initiative has been following the water situation in the basin for years. “The real challenge of a closed basin is to distribute water in a way that is equitable, and people get water when they can and when it’s available,” he said.

Protecting Paa
For the members of the Burns Paiute Tribe, water, or Paa, the word for water in the Wadatika language, is sacred. According to a statement from the Tribal Council, “In our traditional teaching and understanding, Paa has personhood, its own rights and agency. Our Northern Paiute people have held a reciprocal relationship with Paa since time immemorial, and we are taught we have a responsibility to protect and speak for Paa and all other indigenous plants, animals and beings in our homelands.” The tribe has formed the Paa Ad Hoc Committee Project with the goal of coalescing the tribal traditional, tribal legislative and staff technical understanding of the tribe’s interests in and responsibility to Paa so that it can more effectively engage in critically important discussions happening in its traditional homelands. In addition to the work of the Paa Ad Hoc Committee, the Burns Paiute tribe has a representative that participates regularly with the Community Based Water Planning Collaborative.

“Ranchers basically spread water as they could, and they’ve adapted their entire wild hay production to use that surface flooding when its available as it’s available and they try to spread it as far as they can,” Bierly said. “That’s really the way the surface water is managed because of the inability to predict how much and when.”

Gary Marshall, a local rancher and board member of the High Desert Partnership, said that flood irrigation was the first kind of irrigation in the basin. “The land that was of high value was the land that was near the riparian zone,” he said. “As time went on, they could see how they could manage these high water flows and turn them out using them to grow crops on high ground. The meadows grew over time with managed surface water.” Ranchers adapted their operations to the water cycle. “There would be some years with a great amount of water and other years with not so much and other years with none,” Marshall said. In years with an abundance of water, ranchers would stock up on hay so that they would have it in the years when water was scarce.

Marshall noted that at some point, the surface water flowing in the basin became fully allocated. “There wasn’t any way of adding more land that could be irrigated under those flows,” he said.

As the surface water allocation maxed out, people began to look for other avenues to use water. “In order to expand irrigated agriculture past that point, we had to look for a different source of water,” Owens said. That source would be groundwater.

Marshall said that irrigation methods using pumped groundwater have evolved over time. It started with handlines that were labor intensive. Ranchers then moved on to wheel lines that took less labor, covered more ground and were a little more efficient. He noted that while pivots started appearing in the basin in 1970s and 1980s, they didn’t really gain momentum and popularity until the early 2000s. The land that these ranchers were developing and irrigating with pivots was land that would not have been flood irrigated because the surface water would never flow there.

Groundwater Study
A preliminary analysis in 2015 by the Oregon Water Resources Department based on existing information showed that the amount of groundwater allocated through water right permits was more than the estimated recharge. As a result of declining groundwater levels and this analysis, the Department stopped issuing new groundwater rights in April 2016 and started a groundwater study to better understand groundwater resources in the basin. An Advisory Committee made up of local residents, landowners, and others with an interest and stake in groundwater met with the groundwater scientists on a quarterly basis since July 2016. According to the charter, the purpose of the Advisory Committee was to: “Create a forum where groundwater scientists can share data, information, analyses, and observations on a regular basis with the committee” while also providing an opportunity for members to “ share local knowledge, expertise and data that is relevant to the study.” The work of the Advisory Committee is complete and the study is now in the finishing stages as it undergoes scientific peer review and will likely be released in late 2020.

Communicating Results
Some findings of the study have already become apparent. “The preliminary results indicate the situation is probably worse than they [Oregon Water Resources Department and the Advisory Committee] thought initially, and so there’s a huge challenge ahead of us to figure out what to do because the appropriate thing to do is reduce the amount of groundwater that is currently being used,” Bierly said. “Fortunately, the community was able to get a grant to convene the Community Based Water Planning collaborative to help the community figure out ways to address the declines.” The Community Based Water Planning collaborative is a group convened by the Harney County Watershed Council and the Harney County Court to examine water needs in the county and develop a strategic plan to meet those needs. All meetings of the Community Based Water Planning effort are open to the public and held monthly at the Harney County Community Center in downtown Burns.

Moving Forward
As the first phase of the groundwater study wraps up, Harmony Burright, Planning Coordinator with the Oregon Water Resources Department, said the state will be helping to integrate the groundwater study findings into the work of the Community Based Water Planning collaborative. “The Community-Based Water Planning effort is a hub for sharing information about water in the basin, including information between the Department and the community,” she said. “If people want to help figure out what the future of groundwater management in the basin will look like and identify projects and strategies to meet the water needs of all the different water users in the basin, this is an important process to be a part of.” she said. The Oregon Water Resources Department and the Community Based Water Planning collaborative are working together to figure out next steps in the Basin. “While the Department would prefer collaborative, voluntary strategies and actions to reduce declines, the Department is mapping out what regulation would look like if the community and groundwater users don’t come up with a plan to achieve reasonably stable groundwater levels”, says Burright.

Holly Mondo is the new project manager for the Community Based Water Planning effort, and wants to encourage anyone who wants a seat at the table and be included in the conversation to attend a meeting. As the project manager, Mondo’s role is to help build relationships between locals, scientists, academics and government agencies so that there is the best chance for success and implementation for whatever plan comes out of the process.

Share Your Voice in the Management of Water in the Harney Basin
The Community Based Water Planning meetings occur monthly 3-8 p.m. usually on Wednesdays and they include dinner. The group has compiled a list of critical water issues pertaining to the groundwater and surface water in the Harney Basin. This list is a living document that continues to change and grow when someone brings up an issue that is not currently included. People who have strategies for helping to address those issues are invited to submit them. So far, the planning effort has received 66 submissions. The collaborative approach to water planning promoted by the Oregon Water Resources Department is relatively new for the agency but collaborative approaches are not new for the community of Harney County. Collaboration has been a tool used in Harney County for more than a decade and there are at least six active collaborative efforts underway. Harney County residents have learned first hand the practice of working together. The skills and culture of Harney County residents working together are now being applied to the Community Based Water Planning collaborative.

There is optimism that this collaborative approach will work. Owens stated that the groundwater declines were one of the issues that convinced him to run for public office. There is a path forward, and while it will be impossible to please everyone, it is possible to find common ground. The Community Based Water Planning collaborative will be successful finding solutions for this complex situation; “It’s a unique opportunity for our community to be able to assist the state in the management of water in our basin”.